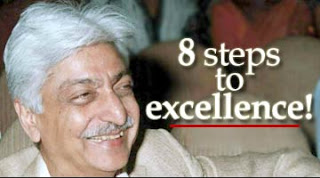 Among others, Wipro has recently won the prestigious 'Risk Management Award,' instituted by the Financial Times-The Banker magazine. What is that which makes this company so successful? "An obsession for excellence," says Azim Premji, Chairman & Managing Director, Wipro Limited.

Chairman and Managing Director of Wipro, Premji is credited with transforming Wipro, his family's vegetable oil business, into one of the world's foremost software company.

Although one of the richest Indians, he flies economy class and is happiest when hiking, reading or discussing the foundation he has set up to promote primary education.

These are changing times. Yet in the middle of all the changes there is one thing that constantly determines success. Some call it leadership. But to my mind, it is the single-minded pursuit of excellence.

Excellence endures and sustains. It goes beyond motivation into the realms of inspiration. Excellence can be as strong a uniting force as solid vision.

Excellence does not happen in a vacuum. It needs a collective obsession as I have experienced the benefits of excellence in my own life. Excellence is a great starting point for any new organisation but also an unending journey. What is excellence? It is about going a little beyond what we expect from ourselves. Part of the need for excellence is imposed on us externally by our customers. Our competition keeps us on our toes, especially when it is global in nature.

How does one create excellence in an organisation?

First, we create an obsession with excellence. We must dream of it not only because it delivers better results but because we truly believe in it and find it intrinsically satisfying to us.

We must think of excellence not only with our mind but also with our heart and soul. Let us look outside, at the global standards of excellence in quality, cost and delivery and let us not rest till we surpass them.

Second, we need to build a collective self-confidence. Organisations and people who pursue excellence are self-confident. This is because excellence requires tremendous faith in one's ability to do more and in a better way. Unless, we believe we can do better, we cannot.

Third, we must understand the difference between perfection for its own sake and excellence. Time is of essence. Globalisation has made the customer only more impatient. This may seem like a paradox: should we aim for excellence or should we aim for speed?

Excellence is about doing the best we can and speed lies in doing it quickly. These two concepts are not opposed to each other; in fact, speed and timeliness are important elements of quality and excellence.

Fourth, we must realise that we cannot be the best in everything we do. We must define what we are or would like to be best at and what someone else can do better.

Fifth, we must create processes that enable excellence. Today, there are a number of global methods and processes available whether it is Six Sigma, CMM or ISO. Use them because they are based on distilled wisdom collected from the best companies in the world.

Also, we must build a strong foundation of information technology, because in this complex, dynamic world, it is imperative that we use the most modern tools to keep processes updated.

Sixth, we must create a culture of teaming. I have found that while great individuals are important, one cannot have pockets of excellence. Quality gives ample opportunities to build a culture of teaming. Cross-functional teams that are customer facing can cut through an amazing amount of bureaucracy, personal empire building and silos and deliver savings that one would not have imagined possible.

The other advantage of building teams focussed on quality is that the teaming culture eventually spreads to the rest of the organisation and teaming becomes a way of life.

Seventh, invest in excellence for the future. Future always seems to be at a distance. But it comes upon you so suddenly that it catches you by surprise, if not shock. What constitutes excellence in the future will be significantly different from what it is today.

In these days of severe market pressures, there is big temptation to sacrifice the future to look good in the present. We must certainly trim our discretionary expenses, but we must ensure that our investments in strategic areas that lead to excellence in the future are protected.

Finally, excellence requires humility. This is especially needed when we feel we have reached the peak of excellence and there is nothing further we can do. We need an open mind to look at things in a different way and allow new inputs to come in.

Otherwise, there is a real danger of becoming complacent or even downright arrogant. I would like to end my talk with a story that illustrates this very well.

A brilliant young professor went to meet a famous Zen master to have a discussion with him on Zen. He found himself in front of a modest house. He rang the doorbell and waited. A while later, he heard shuffling footsteps and the door was opened by the Zen master.

He invited the professor to sit with him on the dining table. The professor was a little disappointed with the shabby appearance of the Zen master. He started quizzing him immediately on comparative philosophies and the Zen master gave some brief answers.

When the professor began to debate with him on those answers, the Zen master stopped speaking and kept smiling at him. Finally, the professor got angry. He said, "I have come from a long distance just to understand the relevance of Zenism. But apparently you have nothing to say. I have not learnt anything from you at all."

The Zen Master stopped and then, once again smiling, he said, "A mind, full of itself can receive nothing. How can I speak to you of Zenism until you empty your mind to learn." The professor understood and apologized to the Zen master. He parted from him, the Zen master -- a wiser man.