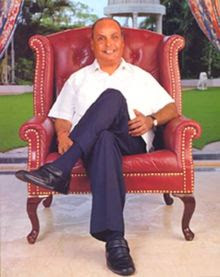 Dhirubhai Ambani was the most enterprising Indian entrepreneur. His life journey is reminiscent of the rags to riches story. He is remembered as the one who rewrote Indian corporate history and built a truly global corporate group.

Dhirubhai Ambani alias Dhirajlal Hirachand Ambani was born on December 28, 1932, at Chorwad, Gujarat, into a Modh family. His father was a school teacher. Dhirubhai Ambani started his entrepreneurial career by selling "bhajias" to pilgrims in Mount Girnar over the weekends.

After doing his matriculation at the age of 16, Dhirubhai moved to Aden, Yemen. He worked there as a gas-station attendant, and as a clerk in an oil company. He returned to India in 1958 with Rs 50,000 and set up a textile trading company.

Dhirubhai Ambani is credited with shaping India's equity culture, attracting millions of retail investors in a market till then dominated by financial institutions. Dhirubhai revolutionised capital markets. From nothing, he generated billions of rupees in wealth for those who put their trust in his companies. His efforts helped create an 'equity cult' in the Indian capital market. With innovative instruments like the convertible debenture, Reliance quickly became a favorite of the stock market in the 1980s.

Dhirubhai Ambani was named the Indian Entrepreneur of the 20th Century by the Federation of Indian Chambers of Commerce and Industry (FICCI). A poll conducted by The Times of India in 2000 voted him "greatest creator of wealth in the century".